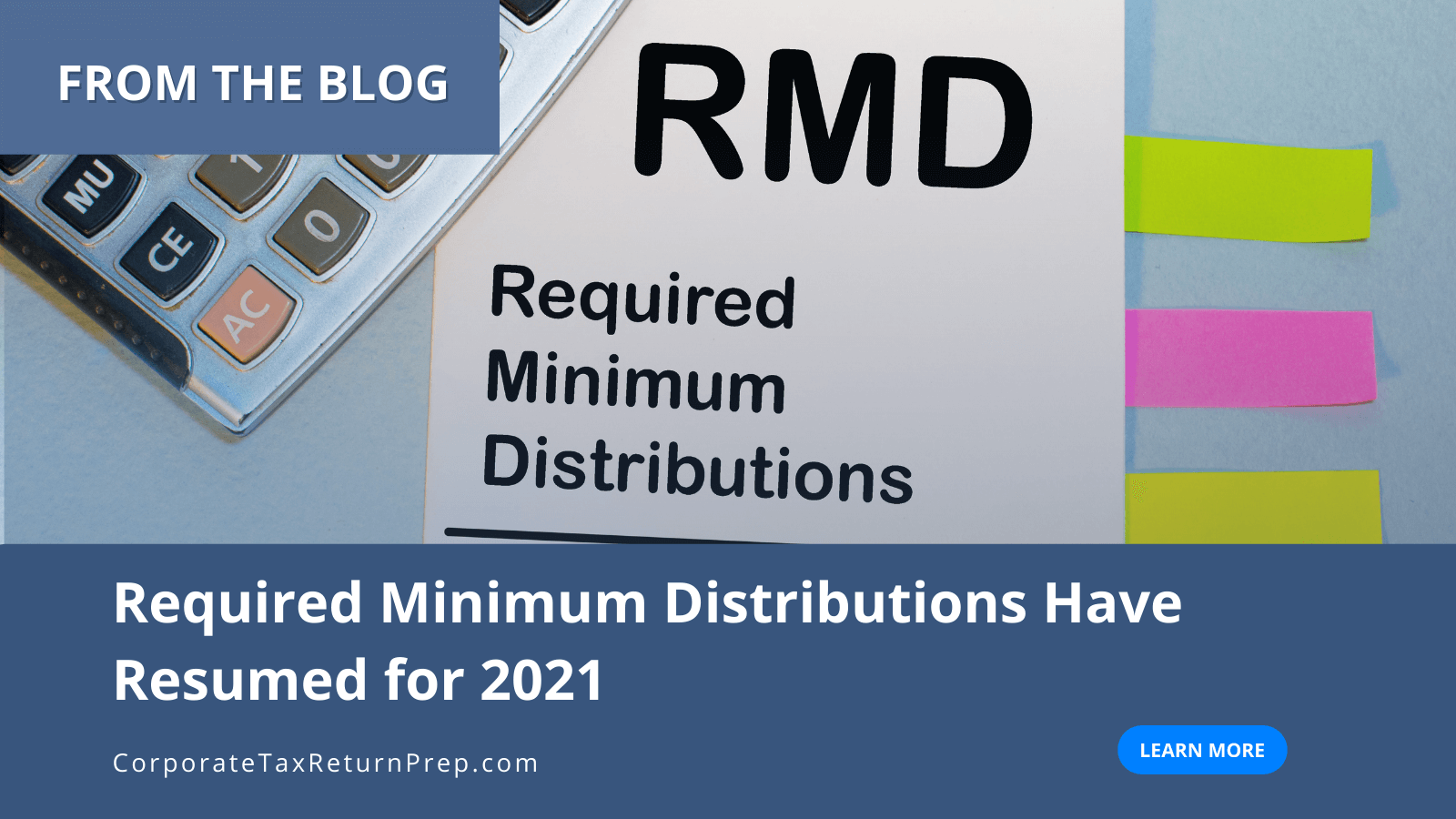 When Congress established tax-favored retirement plans, they allowed taxpayers to take a tax deduction for the amount of their allowable contribution to the plans. But they also included a requirement for a portion of the funds to be distributed each year and be subject to income tax. Such a distribution is referred to as a minimum required distribution (RMD).

There is no maximum limit on distributions from a Traditional IRA, and as much can be withdrawn as the owner wishes. However, if more than the required distribution is taken in a particular year, the excess cannot be applied toward the minimum required amounts for future years.

There have been some recent tax law changes that have led to some confusion among taxpayers subject to the RMD requirement. Prior to 2020, the required starting age for RMDs was 70½. Thanks to the Secure Act passed by Congress in late December 2019, the age at which distributions have to begin was increased to age 72 starting in 2020.

RMDs Resume in 2021 – Since the suspension was for one year only, the RMD requirement resumes for 2021. Of course, the resumption applies to those that attained the age of 70½ in years before 2021, those who turned 72 in 2020, and those who turn 72 in 2021. Still Working Exception – If you participate in a qualified employer plan, generally you need to start taking RMDs by April 1 of the year following the year you turn 72. This is your required beginning date (RBD) for retirement distributions. However, if your plan includes the “still working exception,” your RMD is postponed to April 1 of the year following the year you retire. This delayed-until-retirement distribution provision does NOT apply to IRAs, so even though someone age 72 or older with an IRA is still working, and perhaps still contributing to the IRA, they are required to take a minimum distribution from the IRA each year.

Determining the RMD Amount – The required withdrawal amount for a given year is equal to the value of the retirement account on December 31 of the prior year divided by the life expectancy (“distribution period”) from the Uniform Lifetime Table illustrated below, with the exception where the taxpayer’s spouse is 10 years younger, in which case the Joint and Last Survivor Table is used. It is not illustrated because of its size.

Note: the above table is only valid through 2021. The IRS has released a new table that must be used for the RMD computations beginning for 2022 and subsequent tax years.

Example: An IRA account owner is age 75 in 2021, and the value of his only IRA account was $120,000 on December 31, 2020. His 73-year-old wife is the sole beneficiary of the IRA. From the uniform lifetime table, we determine the owner’s distribution period to be 22.9. Thus, his RMD for 2021 is $5,240 ($120,000/22.9). That amount must be withdrawn by no later than December 31 of 2021. If the same set of facts were to occur for a different taxpayer in 2022, using the new table (not illustrated), the distribution period will be 24.6 and the RMD $4,878 ($120,000/24.6). The new table was designed to take into account individuals’ longer life expectancies based on actuarial statistics developed since the last time the tables were updated. Thus, the comparable RMD is less than under the current table, and at least in theory, the IRA won’t be depleted as quickly.

The RMD for the year can be taken from anyone or several of the taxpayer’s IRA accounts, but the minimum distribution amount must be figured separately for each account, and then totaled to determine the RMD for the year.

Excess Accumulation Penalty – The tax law includes a penalty referred to as an excess accumulation penalty. This draconian penalty is 50% of the RMD that should have been distributed for the year and wasn’t. In the preceding example, if the taxpayer does not withdraw the $5,240 for 2021, he would be subject to a 50% penalty (additional tax) of $2,620 ($5,240 x 50%). Under certain circumstances, the IRS will waive the penalty if the taxpayer demonstrates reasonable cause and makes the withdrawal soon after discovering the shortfall in the distribution. However, the hassle and extra paperwork involved in asking the IRS to waive the penalty makes avoiding it highly desirable; to do so, always take the correct distribution in a timely manner. Some states also penalize under-distributions. Even though a qualified plan owner whose total income is less than the return filing threshold is not required to file a tax return, he or she is still subject to the RMD rules and can thus be liable for the under-distribution penalty even if no income tax would have been due on the under-distribution.

For those 72 and older a QCD will also count towards the annual RMD requirement. However, after 2019 the restriction on making traditional IRA deductions after age 70½ was repealed and Congress added a complication to QCDs. That provision requires the non-taxable portion of a QCD to be reduced by any deductible IRA contribution made after reaching age 70½.

Designated Beneficiaries – Keeping your designated IRA beneficiary or beneficiaries current is very important. You may not want your account going to your ex-spouse, and you certainly do not want a deceased individual to be your beneficiary. In many cases, advance planning can minimize or even avoid taxes on Traditional IRA distributions. Often, situations will arise in which a taxpayer’s income is abnormally low due to losses, extraordinary deductions, etc., where taking more than the minimum in a year might be beneficial. This is true even for those who may not need to file a tax return but can increase their distributions and still avoid any tax. If you need help with planning, please call this office for assistance.